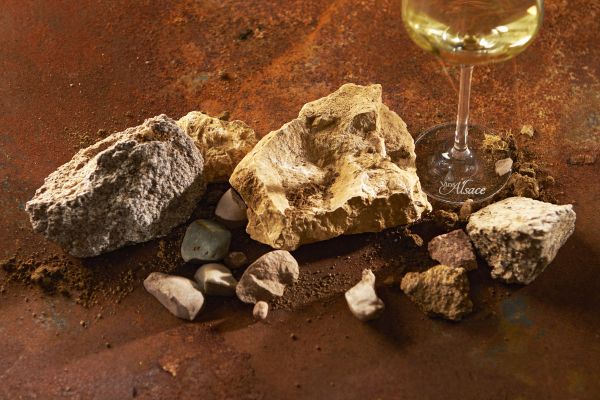 The quality of a wine depends very much on the nature of the soil, the subsoil and its location. The presence of minerals assimilated by the vine, clay to retain water, mineral salts, sand to aerate the soil... so many criterias that influence the vine and the wine.

The Alsace geology presents a real mosaic of soils which makes the complexity of the vineyard: limestone, clay-limestone, marl, clay-marl, marl-limestone, granitic, schist, sandstone, loess and lehms soils, alluvial soils... This great variety of soils is favourable to the blossoming of numerous grape varieties.

This mosaic and this variety of soils and subsoils has its origins in the complex and eventful geological history of Alsace.
In fact, the collapse of the Rhine Gap, caused thousands of years ago by major tectonic phenomena, created a large network of faults with very varied soil situations. But it also separated what we now call the Vosges Massif and the Black Forest, which were once united. The vineyard was thus built on the break zone between the Rhine sedimentary plain and the Vosges crystalline massif, where all the layers of land that had accumulated during the different geological periods were reworked by erosion, thus offering very varied geo-pedological situations. The Alsatian vineyards are mainly located on the Vosges hills and sometimes extend into the plain.